I am exited to enter the new year. I wonder how will I be able to excel all that was achieved in 2011. It is important to know that you are not alone, there are wonderful talented women in the WCA that are willing to share and care. I agree with our President, Judy Parady when she says that the best way to take advantage of all the WCAGA have to offer is to participate.I am ending this year with sharing thoughts and pictures from Susan Ker-Seymer. She ran the Artshare Program.

Recap for ArtShare , Autumn 2011.
"We had two events this fall that really brought the ArtShare experience to a new level. The first was the studio visit and gallery tour with Corrina Sephora-Mensoff in October that included a demonstration of the metal and forging work that she is known for, and a tour of Corrinas latest show, “Flowing as water” all at the Goat Farm.  It was an exciting view into the makings of a body of work, and in the context of opening night.
The second event in November was a wonderful ArtShare at the home of Ellen Filreis, that included a showing of work of several member artists, work of great diversity and depth and insightful discussion about the work. Thank you Ellen for hosting the group and showing your fascinating work."
-(Susan Ker-Seymer)

Loretta is one of the WCAGA's talented and skilled painters and writers:  here is what she had to say about Larry Walker's talk at Mason Murer Gallery and the a direct link to her blog for more and pictures of this event.

"Larry Walker's speech was beyond impressive today. I was actually mesmerized. If I could have scooped up his paintings and taken them home with me, the walls in his section of Mason Murer would have been absolutely bare."

Uncensored from Alpharetta: Larry Walker Tells the Stories that Drive His Art:
Posted by The Willow Tree at 6:47 PM No comments:


I was unable to attend the WCAGA Year End Gathering due to a small family crisis but was happy when Marjorie Jordan send me this Synopsis of the Social and Meeting with a scanned list of the attendees.

From the pen of  Marjorie Jordan,

"WCAGA Annual Meeting and Social held at the Atlanta Contemporary Art Center (ACAC) on Sunday, Dec 11, 2011 from 1:30pm to 4pm.
Members and guests began gathering at ACAC GA around 1:30pm on Sunday 12-11-2011 . . . a table was set up in the foyer brimming with good food and yummy drinks . . . ACAC had a show up and many in attendance began by walking around the gallery space and looking at the exhibit . . . later, people filled their plates with the delicious goodies provided and brought food and drink into the meeting room.  A short business meeting followed.

Judy Parady began by introducing herself and the other officers, board members and committee chairs, each of whom gave a brief description of the work they do for the chapter; Judy followed with a short presentation about WCAGA.  Ann Rowles talked about her work with Programs and mentioned some of the events planned for the new year.  Cherie Redlinger, one of the founding members of WCAGA, who later moved to DC, and was in Atlanta visiting, gave a short talk about the DC chapter.  Judy then ushered in a round table where each person stated their name to the group and gave a brief description of the kind of art work they are involved in.

Barb Rehg followed by projecting images of various members' work . . . if present, the member spoke about her work, if the member was not present, Barb spoke about the work.  It was fascinating to see the amazing range and variety of WCAGA members' work . . . jewelry and metalworking, mixed media, clay, sculpture, oil painting, watercolor. paper making . . . and each member's work is so completely different in attitude, execution, media one from the other . . . the show was extremely enlightening and inspiring.

The meeting was a forum to learn about many of the activities going on within WCAGA, providing an avenue to learn what the members who were present are doing individually with their art and opening up an opportunity to socialize with other members and get to know people on a deeper level."

Posted by The Willow Tree at 6:18 AM No comments:

Lets get to know our Members - Aviva Stern 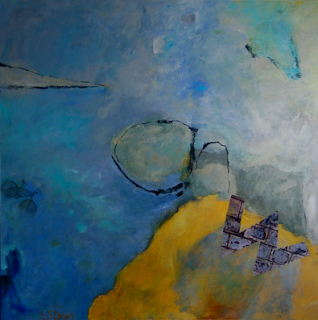 Aviva Stern’s mixed media paintings, trigger memories of calm water, then in the next painting it would remind one of primitive cave paintings. In her sculpture one would get the human figure blowing like grass in the wind or the straight lines of buildings or little bags bearing gifts. Beautiful blues, aqua marines with desert orange. In all her work one finds a choreographed dance of shapes, line and color.
My believe in women’s art is always reaffirmed by the talent, professionalism, and skill that we find in the artists of the WCAGA , and Aviva Stern is another brilliant example. Her career starts with dance after she received degrees in dance and composition from the School of Performing Arts in New York City and New York University School of Arts. Later in life she did an apprentice in ceramic art and studied sculpture and Design at Bezalel Art Academy in Israel. 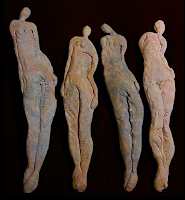 She has been shown in California, in Georgia, in North Carolina, have won several awards and created public works.

Please look at her website for more information and art work. 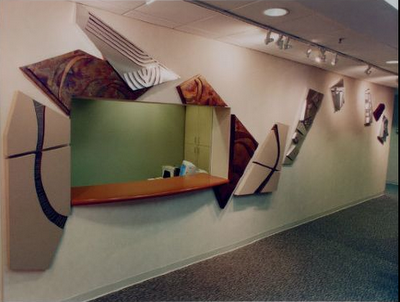 The Pioneering Spirit of America, Alan Avery speaks to Women. 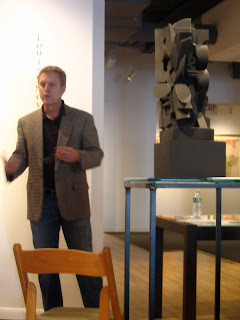 Alan Avery has been part of the art world from the early age of 9 when he was introduced by older friends to artists like Thomas Benton.  Few people knows that Alan Avery had two art related college degrees by the time he was 17. He worked for the Abstein Gallery for 11 years before moving on to the Trinity Gallery that we all knew and loved.  Then just a couple of years ago he changed the Trinity into the Alan Avery Company.

Alan Avery and the Women’s Caucus for Art of Georgia’s paths collided with the celebration of 30 years for the Alan Avery Company. This event is celebrated by the Art show “The Glass Ceiling Shattered,” currently at the Gallery until February 10, 2012. He was kind to invite us to be part of the preview. After looking at the show and thinking about all the events and the people involved it is natural to wonder. Why did he choose women artists, why did he choose these 3 women? Why did he choose that title? That is some of the questions that went through my head. 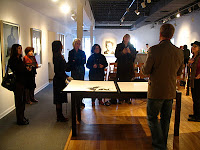 I contacted Avery on Facebook of all places and ask him these questions. It turned out that the answer was not a simple or easily explained one and that I was not the only one that asked him these questions. Other individuals, friends and critics asked the same questions. Thus the talk “ Alan Avery Speaks to Women” was born. On Saturday, December 12 a group of women and one man gathered to listen to what Avery had to say.

Apparently these three women was not the first choice but because of events out of his control he had to change the show and the more he thought about the 30th celebration the more the three in the thirty began to stand out. Thus the choice of three artists. He wanted something new and groundbreaking, something that would challenge the Atlanta Community. Thus three women artists. 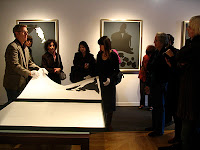 The wonderful title, was from none other than Hillary Clinton. She mention the glass ceiling being shattered in her Concession Speech in 2008. In Alan Avery’s view Kara Walker, Louise Nevelson, and Helen Frankenthaler are and were women artists who helped and still help to shatter that glass ceiling that women have been bumping their heads against, for ages. Read more on this wonderful groundbreaking show here.

In the true spirit of gratitude to the Alan Avery Company for including women in their 30th celebration and being an important part of the Atlanta Art Community during that thirty years, we say thank you.  We wish and hope that the WCAGA and the Alan Avery Company will work together in the future to build the future of Atlanta and Georgia’s Art Community. The road to a positive and open art world might be difficult but in the pioneering spirit of America we will continue to paint, collage, craft, sculpt and putting ourselves out there, to make a difference. Keep holding to that Passion.

Don’t miss this one!
If you only attend one WCA/GA meeting a year – this is it.
We are combining all your favorite things in one lovely afternoon:
Visit with friends
See new art
Delicious food and drink
Prizes
Oh, and we’re throwing in a short business meeting for good measure,
'cause everyone loves a meeting.


IMAGE SUBMISSION
Digital Images
Send up to three images (jpeg format) of your recent work by email no later than
Thursday, December 8, to Barb Rehg:  brehgstudios@bellsouth.net.
The image size should be no larger than 1500 x 1500 pixels.
Photographs
Bring up to 3 photographs of your recent work when you come;  8" x 10" preferable.
Label each photo on the back with your name and the title of work.

LUNCHEON
Drinks
Wine will be provided .
Do not bring Alcoholic Beverages; this would be a violation of ACAC's liquor license!
Bring other non-alcoholic beverages as desired - juice, soda, water, etc.
Food
We will provide vegetable lasagna for an entree.
Please bring appetizers, salad, bread, sides, or dessert to compliment the meal.

Fighting Climate Change with Art by Katie Burkholder According to the Climate Clock, a website that tracks worldwide carbon emissions, we ...

© 2009 Women's Caucus for Art of Georgia. All Rights Reserved.