Kathy Melipoulos’s artist talk was held at GPC- Clarkson Campus art gallery on February 15th. I enjoyed hearing about this talented member’s body of work now on exhibit through March 11th. The show’s title, “Under My Skin”, had new meaning after hearing what Kathy had to say. Many of Kathy’s mixed media works use chamois, which she says, “smells good, is soft, pliable, can be stretched, molded when wet then dried, stitched, drawn on, stapled, stained, painted. Very versatile.”

In her talk, Kathy mentioned she “had never seen any work done on chamois leather. I had seen Native American art done on skin and have since found some contemporary artists who use it.”  To Kathy, skin became a “vehicle for autobiographical subject matter and other things that “get under my skin.”

To someone who appreciates personal story telling in one’s art, Kathy’s work revealed her own journeys, some which were health challenges she has overcome, and her positive philosophy to live life fully each and every day. Articulating her thoughts about subject matter, Kathy said, “Family stories, narrative, impart information . . . Although I do believe all artists are a filter and all art is a reflection of how each one processes life, we all use different language and materials to communicate.”

Besides the chamois skin, Kathy uses aprons, which “are iconic symbols of women’s work, traditionally worn to protect the clothes from dirt. I have saved my aunts’ aprons because they are loaded with nostalgia, memories of family meals and gathering.  They also cover the part of the body that I have had trouble with – heart, lungs, sternum and neck. What’s underneath the “apron armor” can be fragile.”

Text and/or figures are manifest through embroidery stitching – drawing with threads instead of more familiar pens, pencils or paint.  Some powerfully arresting pieces incorporate steel pins. Kathy says, “…the sculpture ‘PinHead’ feels like an extension of drawing. I could have drawn a glass head full of pin cushions but I had a lot of fun searching for the components, painting the pin cushions white, using antique hat pins as skewers, struggling with the many pin pricks.

Kathy’s show is on view at the Jim Cherry Learning Center, Fourth Floor, through March 11, 2017.

As I was leaving Kathy’s exhibit, GPC Gallery Director Don Dougan suggested I visit the solo show of another WCAGA member, Margee Bright Ragland. Margee is a full time professor of art at GSU Perimeter College and plans to retire next year. This marvelous retrospective was in the Perimeter Main Fine Arts Gallery of the Fine Arts Building on the Clarkston campus.

I gravitated toward Margee’s collage works, small in size compared to her paintings. Her shadow boxes were exquisitely crafted with strong use of composition, color, and texture using carefully selected found objects. I could see where each work, even without specific statements from Margee, is meant to begin a dialogue or conversation.  This is the kind of exhibition where you may “surf” the show quickly, and then return later to spend time appreciating the intimate details.

Personal favorites included “Night Bed,” a collage that takes you to another century or world features mystical elements of floating female head and white owl staring at the viewer. Many of Margee’s works incorporate birds, which have their own symbolic meanings relating to both past and present. The collage “Night Vigil,” perhaps a companion work to “Night Bed,” uses different found materials with botanical motifs and patterns. “Suspension,” an assemblage of found and painted objects, symmetrically balances two red ladders and two gold leafed trees flanking what resembles a miniature theatrical stage set. “The Annunciation” is another work where I stood by it for a long time, thinking of the power of a story that probably went with the art – with images of angels, and a large staring eye. As Paul Gauguin said, fifty percent of the interpretation of a work of art belongs to the artist. The rest of the interpretations belonged to anyone who was looking at the work, even if they came up with a totally different idea. I find that is true today; I appreciate that our own life experiences offer up our own personal interpretations, even if different from what the artist intended.

The Closing Reception was held on February 22nd, 2017.  Margee’s new book, “Bright Illuminations – The Art of Margee Bright Ragland and the Words of Others”, is now available on Amazon. The book pairs Margee’s collages with quotes from various authors.  If you missed her exhibition, this is a good way to enjoy Margee’s work.

A sincere thank you to member Don Dougan for the outstanding exhibition opportunities he coordinates as the curator and gallery director of the GSU Georgia Perimeter College and Clarkson Campus Art Galleries, and again, thanks to Don Dougan for his support of WCAGA member artists, for various group member exhibitions, and for solo invitational shows.
In August-September 2016, GPC-Clarkson had a memorable solo show, “Graffitti,” of large scale drawings by member Barb Rehg in the Fine Arts Building’s art gallery. “What is Seen,” a still life photography show for WCAGA artists Vicki Bethel, Lucy Hale, and Loretta Paraguassu was held at the JCLC 4th floor art gallery during Atlanta Celebrates Photography in October 2016.

As WCAGA vice-president Maggie Davis said at the annual meeting, it is important for our members to support each other during the year by attending each others’ shows.  I look forward to getting to see more of our members’ work. 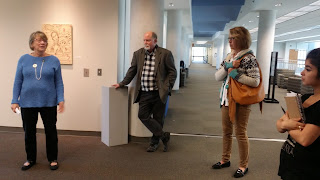 Posted by The Willow Tree at 7:41 PM No comments:

2. What's integral to your art and or art career?
When I sculpt I seek to capture the spirit and beauty of the human form by relying on the simplicity and purity of abstraction in my sculptures. My sculptures reflect inner dialogues, the complexity of the emotions.

3. What themes do you pursue and what medium do you use?
I primarily sculpt in clay, caste in bronze. I do enjoy dabbling some in painting, photography, wire art & create with whatever treasures I find around me!

4. What makes you angry, what makes you happy?
Someone expressing or acting disrespectful towards another upsets me. Spending time with my daughters and their family and pets, my husband, our families & friends, gardening, sculpting and creating art make me very, very  happy.

5. Who and what inspire you in your work and or in your life in general?
Among the people in my life who are an inspiration and inspire me is my mother, who is 90 years old. She is a sculptor who has worked in stone for many years and more recently in her late 80's returned to painting and drawing. She is an amazing woman and mother. I am also inspired through my work with clients. Thus, my art reflects upon matters of the heart.

6. What superpower would you want?
The power to heal the pain of suffering such as Cancer, Parkinson's, Alzheimer's & AIDS etc...would be an incredible super power to possess.

7. What is your favorite artists and or other person?
Among some of my favorite artists are: Andrew Goldsworthy, Barbara Hepworth, Constantine Brancusi, Henry Moore, Frank Lloyd Wright, Georgia O'Keefe and Alexander Calder.

8. What advice would you give to other artists?
Especially when one is going through a challenging time in life -create art. Be patient with yourself and preserver.

Posted by The Willow Tree at 8:11 AM No comments:

Fighting Climate Change with Art by Katie Burkholder According to the Climate Clock, a website that tracks worldwide carbon emissions, we ...

© 2009 Women's Caucus for Art of Georgia. All Rights Reserved.